So far about one hundred PM vacuum system deskstop studies have been carried out. Conclusion has been, that more than 50 % of the systems suffer of poor efficiency.

Is has been diffucult to specify, what are the machines that need improvement, and which do not. This article gives simple quidelines for the bencmarking.

PM vacuum system Speficic Energy Consumption ( SEC, kWh/tn) is one simple way to estimate the state of the existing system.

At the following is presented some typical energy consumption levels for different paper grades ( see pictures 1 and 2  ). This data is collected from the vacuum system studies during 2007 - 2011. 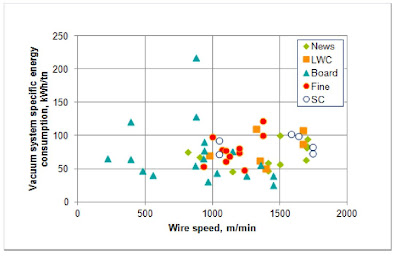 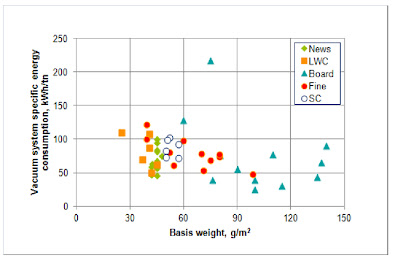 3. Variation between the machines

There exists large variation based on paper grade and machine consept, which makes it difficult give exact conclusions. However, if SEC of PM vacuum system is lower than average, most probably savaing potential is small. For example 40 kWh/tn is good level for heavy board grades, but for low grammage fine papers 70 kWh/tn can be acceptable.

Also in case the electric energy consumption is over 80 kWh/tn, most probably improvement potential always exists.

Vary many machines fall in the middle area, and in these cases the only way to find out the energy saving potential is to make a more detail study.

In many cases it is possible to improve the efficiency ( = decrease energy consumption) with relatively simple improvements without installation of expensive new equipment. If the pay-out time of 4 years could be accepted, improvement potential can be found from most of the machines.

Energy analysis should always be started by doing a desktop study. In order to do it, normally the PI diagram and DCS prints ot the vacuum system operation conditions already give a good starting point.

Further actions can be decided based on this desktop study. If energy saving potential exists, a more detail engineering including field measurements is needed to specify the required actions and pay-out time of the required investments.

Please, do the benchmarking first. It is atways the first step.
- When it has been done, further actions can be started.

Total energy savings achieved by vacuum system improvements at paper machines
has reached the level of 10 MW, which equals the carbon diokside emission of
about 56.000 tn/year.

A desktop study of PM vacuum system eficiency has been done for about 90 paper
machines.Conclusion has been, that efficiency losses take place at 70 % of them.

In a typical case energy savings can be achieved with relatively small modifications, by improving the automation and pump connections ( = without installation of expensive  new equipment, new pumps, fans or blowers).

Pre engineering has been carried out for 30 paper mills, and the total verified
energy saving potential is about 15 MW.

In some cases the required vacuum system modifications have been so small,
that mills have done the improvements inmediatelly. More typically improvements
and modifications of automation and piping are needed, and they have been
done during a two day shut down.

It seems to us, that vacuum system should always be cheked, when a rebuild
of PM is done. "Stand alone" vacuum system improvements  can also be very
profitable, and not necessarily very expensive.

Improvement of the existing system should always be checked first ( = before
installation of expensive new equipment ).

The operating conditions of the PM press section Uhle boxes vary extensively at different paper machines. The operation of several low basis weight machines is based on nip dewatering, and the usse of vacuum is minimized (refer to Article 1).

On the other hand, the machines producing high basis weight paper or board, often still need vacuum for their uhle boxes to keep the felt dryness at the required level.  Due to the different ways of operation, the felt types also vary a lot in different machines. 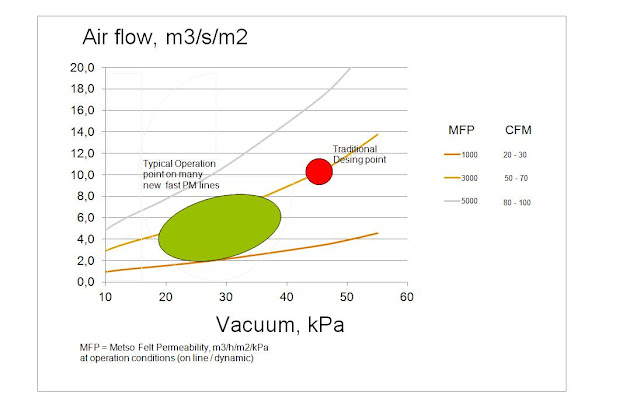 Traditionally, the dimensioning of felt conditioning at a Uhle box has been done based on constant vacuum or air speed at the slot of the felt suction box. This traditional method often leads to the over-dimensioning of the vacuum system, and huge energy losses in variable operating conditions. Additionally, the vacuum system efficiency is often low (= too large pumps or blowers combined with traditional, vacuum level controlling principles).
3. Estimation of Felt Air Permeability

4. Correlation of Static and Dynamic Air Permeability of Felts

Felt suppliers typically give for the felts with the air permeability of a new felt, which is measured in dry conditions (CFM @ 1/2 in, or l/dm2/min at 200 Pa, etc.). It is also well known that the air permeability of the felt drops dramatically during the operation in the first few days, typically to a level of 20 ... 40% (= new felt 100%).
It has often been suggested that the air permeability of a new, dry felt does not correlate with the "dynamic" air permeability in wet operating conditions.
The PM vacuum system energy consumption and air flows were examined at several paper machines between 2005 and 2011. The air flows were also measured and compared with the felt data. The measured machines produced a wide range of paper grades, and used the felts of different suppliers (Huyck, Albany,Heimbach, Tamfelt, Voith, etc.). The felt ages varied between two days and four weeks during the measurements.
According to our measurements, it seems that a correlation between MFP and CFM is possible (for further details, see picture 2, and the referred Article 2). 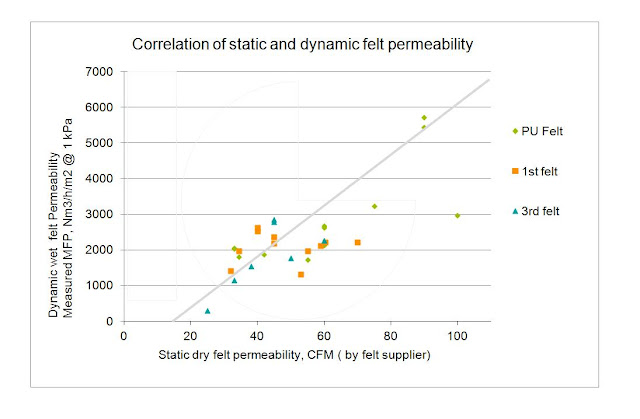 If the felt type at a PM is sufficiently known, it seems to be possible to estimate the required maximum capacity of the vacuum system more accurately than before. For details, compare to the Picture 2.

Where:
- MFP is dynamic felt air permeability
-  K is constant (50 … 60)
- CFM is dry air felt permeability (CFM / in2 @ 127 kPa )
However, it must be remembered, that the aging of a felt still has a significant effect on capacity requirements, the required operating window can still be as high as 1:2, and the vacuum system must be able to operate at a good efficiency level at all operating conditions.

6. Vacuum Systems of Existing PM Lines
The existing PM lines, where the operating conditions have changed, very often suffer from an extremely poor vacuum system efficiency. This is caused by the traditional design principle of the systems. Huge efficiency losses can also take place in controlling the vacuum level (compare to Picture 3). 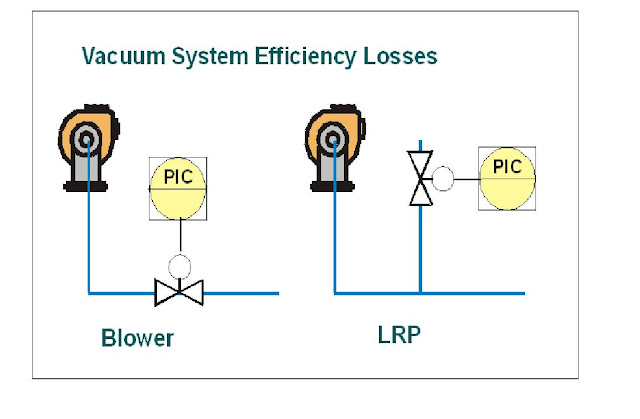 Both the LRP (Liquid Ring Pump) and blower systems can drift outside a good operation area. Typically, totally new design and control philosophies have to be utilized to improve the efficiency of the existing systems.
In any case, it is important to notice that the most important issue is always the selection of appropriate felts, after which the vacuum system efficiency can only be optimized.

7. Online Estimation of Felt Air Permeability
An on-line air flow estimation system was also installed to a few machines, and the MFP was calculated online based on the measured data.
The MFP variation at different machines and in different suction box positions can be seen in the trends. Also the felt startup curves during the first few operation days could be clearly seen, but estimating the felt age on the basis of MFP seems to be difficult, or even impossible (felt aging and plugging).

8. Conclusions
Although several paper machines (producing low basis weight products) currently operate totally without felt conditioners, there seems to be a high number of machines where felt conditioning and Uhle boxes are still required.
The near future will show how the online estimation of MFP can be utilized in practice. In any case, the possibility to estimate felt permeability more accurately helps during the engineering phase of new lines, as well as in the work to improve energy efficiency at the existing mills.
Due to the felt development, the energy saving potential in the vacuum systems of the existing paper machines is high. Several efficiency studies have been carried out at the European paper mills, and typically the payback time of the required vacuum system rebuild is less than one year.

Links to the Articles


Please find attached links to the articles mentioned at my earlier blog and published
at Wxpect Results 2011 and 2012.

During last five years I have been working a lot with energy saving prjects at paper industry.

Short desktop studies have been carried out for over 100 paper machines. Conclusion is, that energy savings can be achieved at more than 50 % of these machines. Estimated theoretical cumulative total saving potential is about 35 MW.

Typically efficiency improvements can be achieved at felt conditioning of  printing and writing paper machiens.

All invesments at paper industry are today difficult to get through, even if pay-out times could be relatively short. Benchmarking is often the easiest method to esimate possible energy saving potential.

Thus now looking for ways to identify the right mills, where profitable improvements could be done. Please compare to the benchmarkng data.